With only about 10 million inhabitants, Portugal, the country on Europe’s western edge, is fairly small. Thankfully, this did not inhibit the development of a fascinating cultural identity that, in combination with the great climate, has led many an expat to consider living in Portugal! 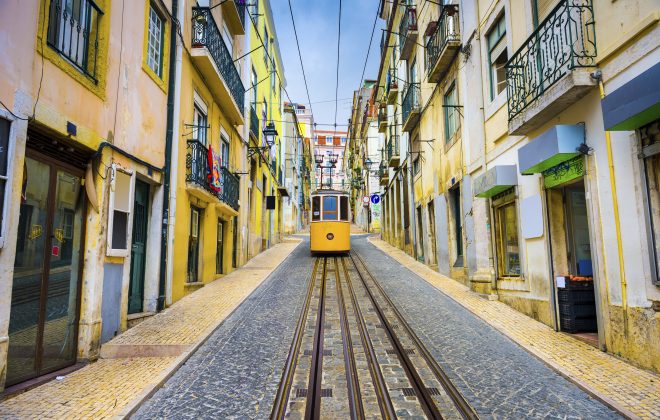 Those of you who have visited the country as tourists before shaping up plans of living there for a number of years will already know what Portugal has in store weather-wise. Portugal is among the warmest countries in Europe — average temperatures you are likely to encounter will only rarely fall into the single digits. While there are considerable changes in temperature between the different regions of the country depending on altitude, proximity to the sea, and other factors, you will mostly encounter mild to hot weather. If you choose to live in the country’s southern or eastern regions, you can expect the heat to be more oppressive than elsewhere in Portugal.

Life in Portugal is not all sunshine, though: while they are still fairly mild, winters are typically very wet, especially in coastal areas. Don’t leave the house without an umbrella or, even better, rain gear. In the wintertime, you might even catch a glimpse of snow here and there, although not too often or for too long.

The population of Portugal is fairly small, with just 10.8 million inhabitants. The majority is concentrated around the northern part of the west coast, between the country’s largest cities Lisbon and Porto. Almost half the population lives in those metropolises and their immediate metro areas. Apart from the west coast, the world-famous Algarve at the southern end of the country is a preferred region for people interested in living in Portugal. As a general rule, however, you can assume the job market — as vulnerable as it is at the moment — in the large cities and their surroundings to be much more promising.

Apart from ethnically Portuguese people, there are larger numbers of people of Eastern European descent living in the country, who mainly came to Portugal in times of labor shortages towards the end of the 1990s and made a new home there. There are also sizeable communities of people from former Portuguese colonies in Africa and South America, as well as from the EU. Numbers of Chinese citizens living in Portugal are also on the rise. It is estimated that about 5% of the population today are immigrants from other nations.

Be Careful Which Language You Use

While English is very widely spoken among the educated population, you should prepare thoroughly for your new life in Portugal by learning at least a little bit of basic Portuguese. Any effort from expats trying to adapt to the language and communicate in the mother tongue of the locals will be met with positive reactions — apart from obviously making your life in Portugal a lot easier. A satisfying, rich experience abroad is always partly dependent on how deep you immerse yourself in the local culture, of which language is an indelible part — living in Portugal is no different in this respect.

A word of warning, though: no matter how similar the languages might appear to untrained ears, you should definitely abstain from using Spanish when living in Portugal. Although the two neighboring nations are on much friendlier terms today than they used to be in the past, you always need to remember that they are very distinct countries with their own heritage, culture, and language, and equating them will invariably come across as ignorant.

The Peaceful Nation of Portugal

The ongoing harsh realities of everyday life in the wake of the deep recession and austerity measures following the international fiscal bailout in 2011 may raise questions on whether or not the country is a safe place to travel or live in these days. While protests are a common sight, they are only very rarely violent, so there is no cause for concern here. Generally speaking, you will experience a very peaceful nation while living in Portugal — a nation that, as every other country, sees its share of crime, but is not a dangerous place to live in. The general safety measures that you would adhere to in any metropolis in the Westernized world will be more than enough to ensure a secure life in Portugal.

Healthcare and Transportation in Portugal

Generally speaking, Portugal has a high-quality health infrastructure, with the best institutions obviously to be found in larger municipalities. Both private and public healthcare institutions exist. Differences in quality exist between the two, although they are not as glaring as in some other countries. You should expect to have to pay on arrival when using private healthcare facilities, so if this is your preferred choice, have a credit card ready. The same applies to private ambulances.

Basic public healthcare is available free of charge for citizens as well as for expats and residents. The range of services offered for free is, however, limited. The austerity measures have made it necessary to charge fees for many treatments, as well as for basic services such as doctor’s appointments. In any case, expats should contact their Administracão Regional de Saúde, the local health administration office in order to register for their Serviço Nacional de Saúde number as soon as they have established residence in Portugal. This is necessary in order to be able to benefit from the public healthcare services. You need to bring your passport, proof that you are a resident, and your social security beneficiary’s card.

For all further information you might need on healthcare in Portugal, please see the website of the Portuguese Ministry of Health, which offers an extensive FAQ database. For a comprehensive listing of doctors, hospitals, and medical specialists in your area, please see the pages of Allianz Worldwide Care

All About Driving in Portugal

If you are going to be dependent on your car during your time in Portugal, there is not much to worry about. Many foreign driver’s licenses are also valid in Portugal until they expire, whereas others are valid for up to six months. The only prerequisite is that it has to be issued and written in the Latin alphabet. If that is not the case, you need to acquire an International Driver’s License in English.

If you are thinking of staying in Portugal permanently or at least beyond the time span for which your license is valid, you might want to exchange it for a Portuguese one. This can be done at the nearest office of the Instituto da Mobilidade e dos Transportes Terrestres (IMTT). This will not only save you a lot of trouble in case your license gets damaged or lost, but will also relieve you from the need of taking and passing another driving test once your original license loses its validity.

Sadly, the rate of traffic fatalities in Portugal is higher than the EU average, partly because despite speed limit enforcements, speeding is widespread, and partly because the Portuguese driving style can tend to be rather on the aggressive end of the spectrum. There are harsh fines for speeding and driving under the influence — the legal limit is 0.5‰ — so it is probably wisest not to emulate local habits. Roads in Portugal are generally of high quality, and the country has invested in the expansion and improvement of its road structure in the past years.

Other Means of Transportation

Portugal has both a reliable bus network and an extensive railway network, connecting all important regions of the country. Additionally, expats moving to Porto or Lisbon will get to enjoy the services of the respective metro system, both of which also reach destinations in the areas surrounding the cities. Public transportation in Portugal is generally rather inexpensive and reliable, making it a feasible alternative to driving, especially in the two largest cities we have mentioned above. Apart from that, taxis are widely available. A fact that might seem uncommon to newcomers is that taxis are generally not metered, but operate on fixed-based fares and additional fees per kilometer traveled.